So in Volume 10 of Vampire Hunter D Novel "Dark Nocturne", there is a character in the final Short Story "Legend of War Fiends" called Dynus who is a friendly Giant and a creation of the Nobility. However, a major characteristic of the Giant is that he was created by the Nobility for the sole purpose of partaking in their blood thirsty battles for their own sick twisted pleasures. As such, the nobility created a secret Underground Nuclear Reactor as evident in the beginning of the story which powered up the Giant for 2,000 years continuously by feeding him 50 Million Megawatts/Hour energy but Dynus was absorbing it and storing it inside of him. The following calc would evaluate the energy absorbed by Dynus and D's tiering 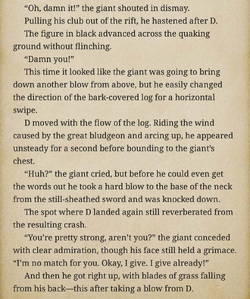 Dynus Power
Add a photo to this gallery

Dynus's tier is Continent level and as such, D should also be Continent level since he not only knocked out Dynus in their first encounter in an extremely casual manner but throughout the entire story it was also heavy implied that D is superior to Dynus.